I was reminded of this short film, written and filmed in 48 hours for the Mental Health film challenge. I wrote the script as quickly as I could, and then we filmed and it was super tiring and stressing and such great fun!

The film didn’t win the challenge, but received a special mention. The brief was to show how pervasive and limiting mental issues are (whatever the specific illness: anxiety, depression, etc).  I thought to make it a Presence, tangible for the sufferer, always present (hence the title) and also something to fight against, with support. Support is fundamental.

I’ve been watching this video, this ‘found footage’, over and over in the last few weeks. Mark Twain. I can see him, moving on film. I’ve read his words, read reviews and critiques of his work. I’ve dreamed alongside his characters, I’ve been carried away by his tales.

And on this palette of faded greys, I can see him. He’s just a man, and he is now dead. But his words aren’t. Maybe that is why I love words. They don’t die 🙂

…The father of American literature, Mark Twain  was also known by his fondness in science and scientific inquiry. He developed a close and lasting friendship

Source: The only existing footage of Mark Twain shot by Thomas Edison in 1909 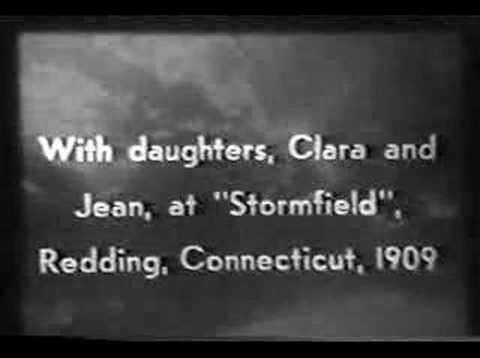 Sometimes, a great b/w, classic noir/thriller is what you want.

And there are few better than this one: Double Indemnity.

Directed in 1944 by Billy Wilder, screenplay by Raymond Chandler based on a novella written in 1943 by James Cain, with Barbara Stanwick, Fred MacMurray and Edward G. Robinson.

I enjoyed watching it, following the over sound narration in its matter-of-fact almost monotone. All the classic elements of the noir are there, and some outstanding example of new filmic narrative.

However, one element stood out for me.  The friendship between Keyes (E.G. Robinson) and  Neff (F. MacMurray): is brilliant, understated, and yet massive in its role. It’s Keyes Neff’s confessing to, and it’s Keyes sitting near Neff and lighting his last cigarette: if it wasn’t for this friendship, Keyes would have solved the insurance case earlier, but he was blind to the culprit, because the culprit was close to him.

In my (unfinished yet) PhD thesis, I argue about themes of homosociality interrupted, and how it’s portrayed on the big and small screen. This is a quite a good example of male bonding as much paramount to the plot as the love story. The male homosocial interaction is camouflaged under horse play, tough love and rough words, and only at the end brought front stage with the utmost subtle intimacy.

I also looked online for a clip  of a speech by Keyes (E.G. Robinson), because it was a magnificent delivery, but couldn’t find it. I give you the text, instead:

KEYES Yeah. In the front office. Come on, you never read an actuarial table in your life. I’ve got ten volumes on suicide alone. Suicide by race, by color, by occupation, by sex, by seasons of the year, by time of day. Suicide, how committed: by poisons, by fire-arms, by drowning, by leaps. Suicide by poison, subdivided by types of poison, such as corrosive, irritant, systemic, gaseous, narcotic, alkaloid, protein, and so forth. Suicide by leaps, subdivided by leaps from high places, under wheels of trains, under wheels of trucks, under the feet of horses, from steamboats. But Mr. Norton, of all the cases on record there’s not one single case of suicide by leap from the rear end of a moving train. And do you know how fast that train was going at the point where the body was found? Fifteen miles an hour. Now how could anybody jump off a slow moving train like that with any kind of expectation that he would kill himself? No soap, Mr. Norton. We’re sunk, and we’re going to pay through the nose, and you know it. May I have this? [a glass of water in his boss’ hands]

A shout-out for this intriguing film on the micro world buzzing at our feet. I’m not too keen on insects, but I’m trying to be better (same right to life that we have) and no, I’m not involved with it in anyway. Looking forward to see it, though. Good stories are good stories, whether their protagonists.